skip to main | skip to sidebar

Tennis in the Park 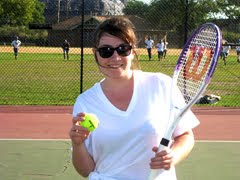 I've played tennis since Jr. High. I'm not great, but I can hit the ball around and volley pretty well. There are some public courts near a High School in my neighborhood of Humboldt Park. Rollin and I have tried to take advantage of the free courts this summer. When school was out of session there was always a group of young little gang bangers that would yell at us and make rude comments while we were trying to play.
Once they chased us to our car and tried to steal our racquets and made fun of Rollin's pants.

Well, it's been a relief now that school is back in session. The courts are surrounded by plenty of playing field for the young high school teams to practice for soccer and football games. None of the kids really paid us any attention and it finally started to feel like we were blending in.

Yesterday I was going through my drawer of "work out" clothes and found this pair of shiny blue leggings. I decided to wear them to the courts yesterday because they were kind of cute and comfy. We started warming up and hitting the ball around. As I was playing at a casual pace I realized the leggings were kind of slipping off of me and so I asked rollin if I could use his belt. That didn't really work and they slipped even more due to the weight of the metal on the belt.

I just ignored this nuisance and thought it was pretty minor and not worth going home. We proceded to play an actual game. I served first and i was like

"Zero-Zero. Love-Love"
and smacked the ball over to the other side.

We slowly got into the game and I would have to pull up my pants like every other hit or so. It wasn't so bad early on, but as we were getting into the heat of the game it really started to piss me off.

Because of this distraction, rollin won the first 2 games. It was ON in the 3rd game.
We were at the end of the match and it was my point at Ad-In (that means whoever is serving has won the challenge where both players are tied at 40/40 and they just have to sinch the deal and kick out one last point before they've won the game.)
It was a great volley. I got some awesome shots and killed it by sprinting up to the net and smacking the ball on the opposite side of the court. No way rollin could have hit it. You can imagine I was pretty pleased with myself, but after the initial rush had set in I heard this kid say really loudly

"LOOK AT THAT GIRLS BUTT"

The soccer team, the football team, the bus drivers waiting to take the kids home were all laughing hysterically.

The leggings had slipped off of me and I didn't even realize cuz they're kind of like a second skin, ya know.

I was SO embarrassed and pulled up not only the leggings, but my pink cotton polka dotted undies i bought at Primark in england. For those of you who aren't familiar with Primark, it carries the equivelant of the selection of undergarments you would find at a huge grocery store in the health and beauty aisle.

I thought to myself:

"the show must go on"

and continued to finish the game. i thought it would seem more lame if I just left right after. I didn't even win the set either.

I came back today to play some more, take this photo and hopefully recover from yesterday's mishap. I accidentally hit a ball out into the football field.

The coach came up to me with the stray ball and said:
"you were out here yesterday, wernch you girl?"

GAAAHAhahaha... oh no! that is ridiculous! and, umm- gross coach.

blake said you were in town, sorry i missed you! when will you be around next? i'll poke around the internets for your shows, i think i still have your number.

I saw you play last night in Troy, NY. Not the most receptive crowd! I'm looking forward to hearing more of your music.

sorry for the unrelated comment; just wanted to say i'm listening to both rockwell & afton, like, all the time -- great to have different versions of these amazing songs which just never manage to bore me. thanks for the music.

Having a Good Time